The political divide in the country with the world’s largest Muslim population appears to go deeper than the bitter enmity between President Joko “Jokowi” Widodo and his former archrival, Prabowo Subianto.

It is thus premature to believe Indonesian society is no longer polarized after the two politicos decided to bury the hatchet and team up “for the sake of the country”, with Prabowo now serving as Jokowi’s defense minister.

Political analyst Adi Prayitno from State Islamic University (UIN) Syarif Hidayatullah Jakarta said the emergence of new name-calling in digital political conversations only showed that political reconciliation was limited to the elites. The grassroots, he said, were still very much divided.

“At the grassroots level, the rift is real. Frankly, both Jokowi supporters and Prabowo supporters are disappointed by the fact that the two are now allies in the [government] coalition. It was as if their rivalry thus far was nothing but a momentary political commodity,” he said.

“That is why both supporter camps are looking for a new battleground. This is where Anies Baswedan comes in, he is used as a proxy for political confrontation.”

But what is kadrun? And who is Togog? And what does Anies have to do with it?

A Google search of the word kadrun gives you more than 103,000 hits. A search on Twitter shows a long list of tweets using the word, with the most recent ones being posted just minutes or hours ago.

Kadrun is short for kadal gurun (dabb lizard), a reptile that inhabits northern parts of Africa and the Middle East. According to John P. Rafferty in his book Deserts and Steppes, these lizards, when roasted, are a Bedouin delicacy.

Kadrun is now often used by Jokowi’s hardline supporters to refer to those who are critical of the President and supportive of Jakarta Governor Anies Baswedan, now seen as a potential presidential candidate in 2024.

The term carries a slightly racist undertone, since it is primarily used to discredit Jokowi’s remaining and staunchest critics: the Islamists, some of whom are either of Arab descent (like Anies) or wear Middle Eastern clothes. 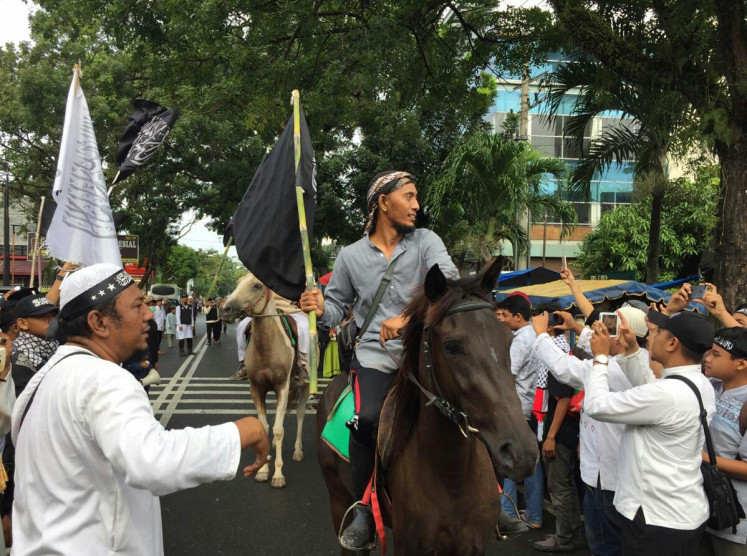 People attending the rally on Dec. 2, 2018, put on a number of performances, which included parading on horses and waving flags bearing the tawhid (oneness of God). Thousands of Muslims gathered in Medan, North Sumatra, to mark the anniversary of the 2016 anti-Ahok rally. (JP/Apriadi Gunawan)

While many Jokowi supporters appear use the word to label all Islamists regardless of their race, using the term to describe Anies, who was once accused of promoting racism by using the term pribumi (indigenous people) after defeating a Chinese-Indonesian opponent in the Jakarta election, could be problematic.

This interaction between two Twitter users serves as a clear example of the use of the term kadrun.

Commenting on a news report about a remark by Anies about Jakarta’s regional budget, user @MohRusdi93 tweeted, “The kadrun camel answers.” The word kadrun, combined with camel, refers to Anies — who is an Indonesian of Arab descent.

In response, @Jacklyn88773394 tweeted: “When it comes to the [Chinese-Indonesians], [you] tell people not to be racist. But you’re mindlessly calling other people kadrun camel.”

There are other pejorative terms that also carry racist undertones, including sobat gurun (our desert fellow), bani onta (sons of camel) and wan abud, which almost exclusively refers to Anies.

Togog, the ‘evil’ brother of Semar

Before the word entered the vernacular of Indonesian political discourse, Togog was known as a character of Javanese shadow puppetry. In the wayang story, Togog is the elder brother of Semar.

“Yay! I am present during the meeting of Pak Jokowi and Pak Prabowo. The second wayang from the left is Tejo, short for Tejo Mantri aka Togog, the older brother of Semar. (Big Bang in wayang story is a broken egg, the shell becomes Togog, the white part becomes Semar, and the yolk becomes Bathara Guru,” he tweeted.

In the picture, Jokowi sits in front of Togog, hence the nickname for Jokowi’s supporters and those who openly criticize Anies.

Jaya Suprana, a wayang enthusiast, writes for RMOL.com that Semar and Togog are two gods assigned to become advisers to the Pandawa and Kurawa knights, respectively. Pandawa are the righteous knights, while Kurawa are their evil adversaries. As an adviser to the Kurawa knights, Togog is often also perceived as evil.

Netizens have picked up the stigma. For instance, user @Mustafa36185013 used Togog to call Indonesian Solidarity Party (PSI) politician Dedek Uki, who was criticizing Anies on a Twitter thread.

“Hey, Togog! I dare you to investigate Sumber Waras hospital. If you are afraid, then you are not mentally sane,” said @Mustafa36185013.

Will this ever end?

With Anies still seen as a contender of whoever gets the backing of Jokowi’s supporters in 2024, Adi said the name-calling in political conversation was likely to continue.

This was part of the so-called cyberdemocracy, where two individuals with different political views tended to be more hostile on the web than in real life. “If they meet in real life, these supporters will be more docile and not as stern as they are in social media,” he said.

Adi admitted, however, that social media alone should not be blamed for the name-calling. “Bickering and gossiping, even mockery, are part of our political culture,” he said.

Indonesia’s forex reserves rise to near record-high in June

Guardiola at a loss to explain Man City defeats