A wide variety of signature and special delicacies for takjil (light snacks to break the fast) is among the many things that people fasting look forward to during Ramadan. For Jakarta residents Ramadan is a great time to check out the treats offered by dozens of vendors across the city.

During the Ramadan celebration, many vendors spread their snacks and food on tables for buyers to peruse. The Bendungan Hilir (Benhil) market area in Central Jakarta is a legendary spot for takjil vendors. The area has been for years synonymous with various and affordable takjil ranging from sweet snacks and ices to savory dishes.

Residents line up early to get their hands on the takjil on offer. Kompas.com reports that people start to gather and form a line in the area from 3 p.m., almost three hours before it is time to break the fast. The crowds result in mild traffic congestion around the market area.

Annisa Oktaviani, 20, a secretary with a private company from Kebayoran Baru, South Jakarta, said that she had come all the way from her office in South Jakarta to Bendungan Hilir to buy some of the snacks to break her fast.

“My friends told me that Benhil is famous for its light snacks, so I decided to go there with my boyfriend to buy something to break our fast,” she told The Jakarta Post on Tuesday.

Annisa from Cimahi, West Java, said it was her first time buying light snacks in Benhil.

“I hope the food is as good as what people have been raving about. I’m planning to buy some fritters and maybe kolak too, since those are my favorite takjil menu items,” she said referring to the popular sweet condiment made out of coconut milk and palm sugar. 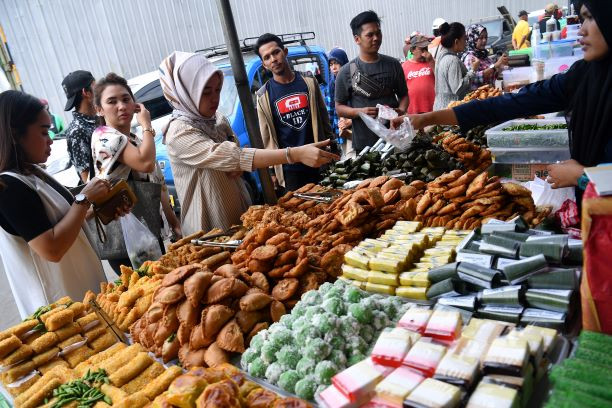 Buyers purchase ‘takjil’ to break their fast from vendors in Bendungan Hilir market in Central Jakarta on Monday. (Antara/Sigid Kurniawan)

Reza Darrmawan, 24, who lives in Tanah Abang, Central Jakarta, said that buying takjil from Benhil had become a tradition for his family. Reza said that every Ramadan they often bought snacks from the place.

Besides Bendungan Hilir, other parts of Jakarta also have an abundance of well-known and affordable takjil vendors.

On Jl. Panjang in Kebon Jeruk, West Jakarta, the vendors occupy a stretch of sidewalk and Jl. Kramat in Central Jakarta is famous for its variety of Minangkabau dishes, such as lemang (glutinous rice cooked in a hollowed bamboo stick) and nasi kapau (Minang-style mixed rice).

Other locations include Sunda Kelapa Mosque in Central Jakarta and Jl. Soka in North Jakarta.

Although each area has its own takjil specialties, the most common items that can be found in every place is kolak, es pisang hijau (green banana ice dessert), rice porridge with Pacar Cina jelly, as well as fritters.

Other than light snacks, traditional meals are often available as well, such as gudeg (unripe jackfruit stew), grilled fish, laksa and nasi rames (mixed rice). The price for the light snacks range from Rp 2,500 (18 US cents) to Rp 20,000.

As most of the vendors sell their takjil along the streets and sometimes on sidewalks, the Jakarta Public Order Agency (Satpol PP) has warned them against selling in restricted areas as their activities often disrupt traffic.

“As long as they do not disturb the public order, they can [sell takijl on the streets], but if they cause problems, we will discipline them,” Satpol PP head Arifin said on Monday, kompas.com reported.

He cited the 2007 bylaw on public order, which prohibits itinerant vendors from operating on sidewalks, streets and bridges. The bylaw, he said, only allowed street vendors to operate in specific places after acquiring permits from the Jakarta Governor in the form of small and medium business coaching. (ami)

Jokowi not running away from protests, palace claims

Jakarta’s office market to remain under pressure in 2021: Colliers

Japan to use cyberattack countermeasures to protect Tokyo Games