The Bogor Public Order Agency (Satpol pp) tore down 22 buildings used as karaoke bars on Thursday ahead of Ramadan as part of a policy that restricts entertainment places from operating during the holy month.

The 22 buildings were located in Kemang district in Bogor regency, West Java. Bogor Satpol PP’s public order division head, Ruslan, said the activity was in accordance with the prohibition against the operation of entertainment centers during Ramadan.

“We are eradicating night entertainment places and we hope such places will never appear again,” he said on Thursday, adding that the agency planned to demolish other establishments in other areas, such as Parung, Tajur Halang and Cileungsi.

Prior to the crackdown on Thursday, the regency administration informed the owners of the establishments of the demolition plan. Some owners partly dismantled their buildings voluntarily. Satpol PP personnel demolished the remaining buildings. 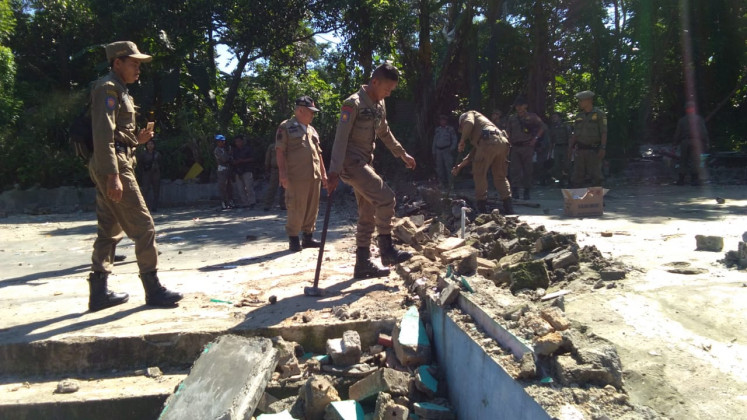 Bogor Public Order agency (Satpol PP) personnel stand near the rubble of demolished buildings in Kemang district, Bogor regency, West Java, on May 2. The agency tore down 22 karaoke parlors ahead of Ramadan as part of a policy that prohibits entertainment places from operating during the holy month. (JP/Therersia Sufa)

Kemang district secretary Ridwan said his office would cooperate with a local consultative forum, residents and local figures to monitor the area to prevent anyone from rebuilding such places on the site.

Many regions across the archipelago prohibit entertainment places such as nightclubs and karaoke halls from operating during the entire month of Ramadan. (ami)

Emotional Suarez proud to have thrived alongside Messi as he heads...

Silver says NBA participation at Tokyo Olympics may be limited